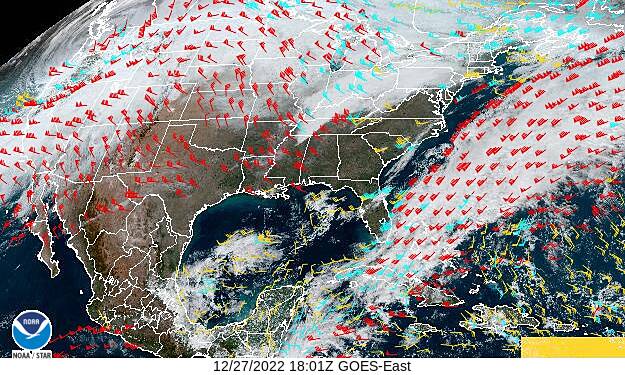 “Over the past week, this winter storm brought dangerously cold temperatures, blizzard conditions and coastal flooding to almost the entirety of the US, wrecking Christmas plans along the way,” reports CNN, summing up the powerful winter storm that has slammed both Canada and the United States. “More than 55 million people were under wind chill alerts Sunday morning, and freeze warnings are in effect across the South.”

AccuWeather notes that both large scale and localized outages were widespread across the United States, with more than 1.375 million households experiencing outages during the peak on Christmas Eve.

Although temperatures weren’t as cold in western New York as they were in parts of the mountain-west and upper mid-west, like Wyoming, Colorado, South Dakota, and North Dakota where temperatures plunged more than 40 degrees in less than an hour, the winter lake effect blowing off the Great Lakes dumped amounts of snow in and around Buffalo, unmatched outside of mountain passes in Western states. Buffalo received more than 43 inches of snow by Christmas morning, with the snow and white-out conditions leaving hundreds of people trapped in their cars on clogged roads for upwards of two days in some locations. Thirty-seven people are known to have died so far in Erie County, New York, alone.

Eastern New York state was not spared by the storm. According to the National Weather Service, New York City recorded its coldest Christmas Eve at several locations, including its JFK and LaGuardia airports, and, at 15℉, the high recorded in Central Park made it the second-coldest December 24 in at least 150 years.

Blizzard conditions in Ohio also caused deaths. KAIT-8 reports that a 50-vehicle pileup on December 23 resulted in at least four deaths and dozens of injuries on the Ohio turnpike. The highway was closed in both directions as authorities tried to clear the wreckage amid freezing cold and blowing snow. Across the state more than 1,300 winter weather related accidents were reported over the weekend, with 13 deaths.

Canada also suffered casualties due to the winter storm. CNN reports that four people died and more than 50 were injured in a single accident in southern British Columbia when a bus went off the road and overturned.

“The road conditions were described as very poor with ice and snow on the road surface along with rain and hail falling,” Canadian authorities reported, according to CNN.